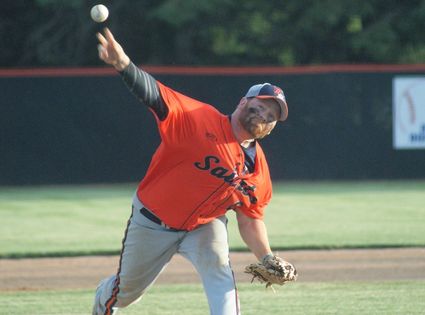 Austen Hadley pitched the final two innings against Meire Grove and earned the win for Elrosa.

For the third year in a row, the Elrosa Saints amateur baseball team has earned a spot in the Region 15C tournament. The No. 1-seeded Saints dispatched No. 4-seeded Meire Grove on Sunday afternoon (July 29) with a 5-4 win. Elrosa out-hit Meire Grove nine to five, with Matt Schmitz getting the winning RBI-single that scored Austin Imdieke from third. Schmitz went 3-for-5 with two RBI and one run scored, and Kevin Kuefler went 2-for-4 with another run scored. Elrosa went ahead 3-0 after two innings, and the Grovers tied it at 3-3 with three runs in the top of the fifth.

(HD video) Here's video from the bottom of the seventh inning in the July 21 contest between Elrosa and New Munich.

Now with a 20-7 overall record, Elrosa advances to the Stearns County League North division championship game that they will host at noon on Sunday, July 30. The opponent is the winner of the Spring Hill-at-New Munich contest that took place today. *Update: New Munich defeated Spring Hill 4-3 in walk-off fashion. The No. 3-seeded Chargers tied the game 3-3 in the top of the ninth inning.

The Grovers go on to the elimination game that will take place at 3 o'clock on Sunday, July 30 in Elrosa against Spring Hill.