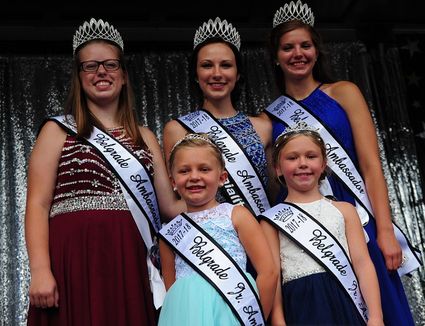 Belgrade has new young ladies to represent the town over the next year after new royalty was crowned at the Belgrade Royal Ambassador program on Saturday (Aug. 12) of August Fest. The program was held on main street for the first time in many years, with a beautiful stage decorated on a GTS trailer parked kiddie corner at the center of downtown next to the Belgrade Meat Center. Hundreds of well-wishers, friends and family were in attendance. The emcee for the program was 2017 B-B-E graduate Molly Tengwall.

Outgoing royalty are Megan Pflueger, Ellan Fischer, Jacinta Jackson and Megan Carroll. All four ladies gave heartfelt farewells prior to the crowning of the new royalty.

Crowned new Belgrade Junior Royal Ambassadors were Marley Lecher and Makenna Roelike. Following that, awards were given for a couple extra categories with the Royal Ambassador ladies. The winner of the Evening Gown award was Nicole Wesbur. Wesbur was then awarded the Photogenic award, given by Heidi Duke-Wuertz, who provided stunning photos of all candidates as a courtesy to the town of Belgrade. Earning the Congeniality award was Aly Riggs. Riggs, Wesbur and Kori DenHartog were then awarded crowns to become the Belgrade Royal Ambassadors for the 2017-2018 year.

Check out high-definition video below of the coronation segment of the program. Extended coverage of the program and the candidates will follow in the Aug. 17 issue of the Bonanza Valley Voice newspaper.