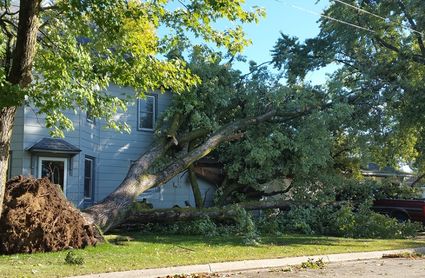 This is a common sight across the Bonanza Valley as folks woke up on Wednesday, Sept. 20. Shown is a house in Brooten with a large tree laying on it.

First of all, NO, part of the roof of the B-B-E elementary school is not missing! That is a wildly untrue rumor, probably among many other untrue rumors flying around.

Here's the real story...a severe thunderstorm packed a huge punch and knocked out power across the Bonanza Valley area. The eye of the storm hit Brooten at about 12:40 a.m. on Wednesday, Sept. 20 with sustained, 80-mph straight line winds. Around that time, a power line arced near the Bonanza Valley State Bank property along Highway 55, taking out power in the heart of town. The Brooten Fire Department responded to monitor the power line and watch for any signs of fire danger. During the 10-minute wind storm, vinyl house siding was seen blowing up and down main street in Brooten.

Belgrade-Brooten-Elrosa schools has announced that school is (CLOSED) for Wednesday, Sept. 20. As of sunrise, the majority of the rooms in the B-B-E elementary school building are without power. Tri-Valley also announced that for now, the day care is closed until the electricity situation changes. Also, the entire B-B-E high school is lacking power, as the town of Belgrade seems to have taken the brunt of the storm that passed through the area. Residents woke up to downed trees in at least one-third of every property. Part of the roof of the Belgrade Hardware Store blew off and landed in at least four separate locations within a radius of one block.

*Update at 08:54: the Tri-Valley day care as well as B-B-E schools are closed for the day. Also, the B-B-E wrestling club is organizing teams of volunteers to go around at least in Belgrade to clean up debris. They are meeting at the high school at 9:15 a.m.

*Update at 09:24: the Agri-Lite electric sub-station three miles west of Brooten was damaged when three power poles snapped off from the wind and landed on the equipment. The Brooten Fire Department responded soon after the damage took place to block County Road 8, as the poles laid across the road. By 9 a.m., crews were on the scene digging in new holes for new power poles.

*Update at 11:47: power across most of Brooten and Belgrade has been restored, although reports indicate that some residential locations in Belgrade are still operating without electricity. Also, the Elrosa area also received considerable damage at some locations.

*Update at 12:55: the Belgrade Hardware Store is up and running, open until 5:30 p.m. today. They shared the following statement to the public: "We hope everyone is safe after the storm. We have sustained some damage but are up and running as we clean up and assess the damage. We are also offering discounts on clean up tools if you have something you need. Our roof was damaged, which allowed a great deal of water in the back storage room. We are absolutely humbled by everyone's generosity in helping with clean up. We have plenty of rakes, a few chain saws, hand saws, gloves, tarps and shovels. And hot coffee, too!"

*Update at 23:13: after a long day of news-gathering and other work, the Voice is pleased to report that no injuries were reported from the storm or its aftermath. Power was restored to every sector of the city of Brooten with the exception of a few private properties. A complete report on the power situation in Belgrade was unavailable at this time, although, unofficially, the Voice has heard that most areas of the city of Belgrade have power restored. Also, B-B-E schools will resume classes on Thursday. Another web story will be posted late Wednesday night with additional information, video and photos from the storm's aftermath.