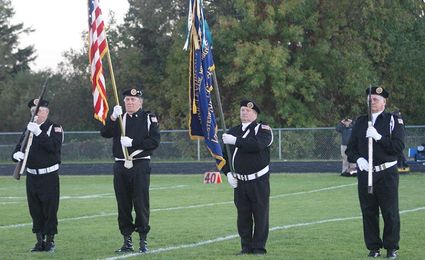 Four members of the Belgrade V.F.W. Color Guard standing during the National Anthem performance on Friday, Sept. 29 at B-B-E.

The Belgrade V.F.W. Color Guard presented the American Flag and the Minnesota Flag prior to the Homecoming football game at Belgrade-Brooten-Elrosa on Friday, Sept. 29.

(HD video) The Color Guard and then National Anthem prior to kickoff of Homecoming football at B-B-E. The singing of the National Anthem begins around the 1:20 mark in the video.

The scene before kickoff was picturesque, even picture-perfect at the B-B-E Jaguars football stadium, as the four members of the Belgrade V.F.W. gathered on the west end of the football field along with our B-B-E Jaguars football team. While our Jaguars stood side-by-side along the length of the west end zone, they held their right hand over their hearts with their helmets in their left hand. The entire stadium went silent as the V.F.W. Color Guard marched across the west half of the field towards the 50-yard line. There, they made a left turn to face the center of the stadium seating. B-B-E junior Kaylee Torgerson then performed the National Anthem. Once the singing ended, the crowd cheered and clapped. Finally, the four Color Guard members marched straight ahead to the north side of the football field. There was a four-second pause once they got to the sideline, a pause in which the stadium went silent again. At that point, the players dismissed from attention and gathered around the west goal post to prepare for starter introductions.