BVD kicked off Thursday, July 11...and it's heating up! 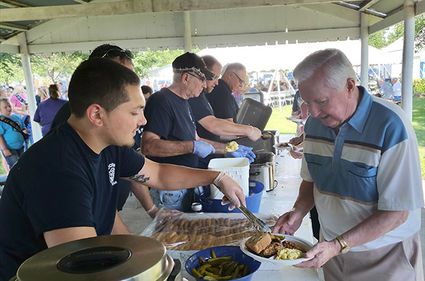 Bonanza Valley Days 2019 in Brooten has a long and thorough list of food options for the public to take in across the four-day event on July 11, 12, 13 and 14. Below is what Brooten has lined up, from the top!

Friday, July 12...the B-B-E baseball club is selling hot dogs, pulled pork sandwiches and other food options along with bottled water and pop at the BVD youth baseball tournament. This tournament is being hosted at both Brooten and Belgrade (high school). The third/fourth grade baseball team is playing in Brooten at the city park by the B-B-E elementary school and also at the elementary school diamond next to the bus garage.

Make sure you bring your appetite when you visit Brooten on Friday night, as the Brooten Fire Department will hold their Fireman's Chicken BBQ supper at the city park from 5 to 8 p.m .; cost is $9.50 for a half-chicken meal, and $8 for a quarter-chicken meal. Music will be provided by the Nite Owls band from Sauk Centre.Also, hot food and other usual food options can be ordered and purchased at RJs Mini Mart, the KaDe Shack as well as the Chuckwagon all day Friday. The Chuckwagon serves until 9 p.m., while the KaDe Shack will close the grill down at 5 p.m. for the chicken dinner. RJs serves hot food until 9 p.m.

Over at the Brooten Pavilion, beer and set ups are available for those attending the Gig Noonan dance that runs from 7 p.m. to 11 p.m. Click here for a photo gallery from Friday night of BVD weekend last summer! (short link) https://bit.ly/2LAS9IB.

Saturday, July 13...Saturday of BVD weekend, the most intense day of the four day celebration, starts off with terrific homestyle-cooked food at the KaDe Shack with Tom's famous breakfast buffet. They will be serving from 6 a.m. to 11 a.m., and the price is just $8 for adults! (Kids under 12 are half off)

Starting at 8 a.m., the B-B-E Knights of Columbus will be serving root beer floats during the BVD Car and Tractor Show. They generally serve past noon, and in past years they've gone through 25 to 30-plus gallons of ice cream! The Car and Tractor Show runs from 8 a.m. to 1 p.m. on main street. The K of C root beer float stand will be located on the east side of main street near Jana Mae's.

Also starting at 8 a.m. in downtown Brooten, Dean Clausen with Bark n' Pig BBQ will have a smoked barbecue stand open on main street. He is setting up on the open lot between Jana Mae's and the Classic Co. building.

Starting around 9 a.m. on Saturday morning, The Donut Guy will have their mini donut stand open on the north end of main street. They also have delicious breakfast burritos, apple caramel sundaes, cheesy nachos and German brats.

...but there's more on main street in Brooten to help nourish visitors to the Car and Tractor Show! From 9:30 to 11 a.m., Stearns County Dairy Princesses will be serving free Stony Creek Dairy milk with Brooten Bakery cookies (set up outside the Brooten Bakery).

By 10 a.m., the Sedan Fire Department will open their hamburger stand at the shelter next to the softball field at the Brooten city park (Pavilion side of Highway 55)...last year they served over 400 hamburgers!! Wow!

Finally, after 8:30 p.m. on Saturday during the Dana and the Bottle Rockets street dance, hot food will be available at the B-B-E Booster Club food stand, which will be located either at the north or south end of main street. The B-B-E Wrestling Club will be staffing the food stand.

And! Can't forget to mention the Chuckwagon (320-346-2755) and RJs Mini Mart as other food options on Saturday. The Chuckwagon will serve until 9 p.m., and at RJs, they will be serving hot food options until 10 p.m. and later if the demand is still going strong.

Saturday, July 13...the B-B-E Boy Scouts will be staffing a Dad's Belgian Waffles breakfast starting at 8 a.m. at the Brooten city park. Featuring all-you-can-eat waffles, syrups and toppings, sausage, coffee, juice and milk. Cost is $8 for adults, kids ages 6 to 12 are $6, and kids five and younger are free! Sponsored by B-B-E Boy Scouts Troop No. 667.