A sudden loss to the community

Jaguar Country is dealt a blow 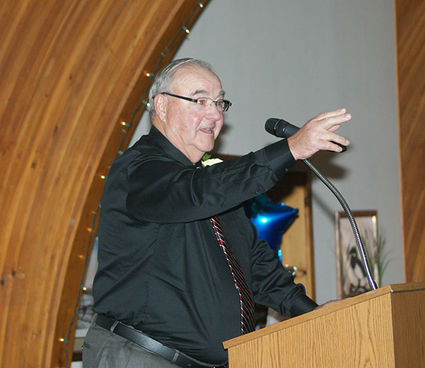 Dennis Weimerskirch is shown speaking at the Belgrade-Brooten-Elrosa Hall of Fame banquet during the night he was inducted in the organization's inaugural class on October 10, 2015.

The Belgrade-Brooten-Elrosa community is reeling from the news that former high school math teacher and coach Dennis Weimerskirch passed away on Monday, September 2 from natural causes.

Weimerskirch was hired as a math teacher and coach at Belgrade high school in 1962. Then began a 35-year career in the school district, which later became Belgrade-Brooten-Elrosa after 1989 with the pairing and subsequent consolidation in 1995 with the neighboring Brooten school district. Over that time, he coached hundreds and hundreds of young men and was a role model to every student he worked with, whether they were in the classroom, sitting in the school cafeteria, passing in the school hallway or out on the football field.

During his teaching and coaching career, Weimerskirch was dealt two incredibly difficult blows with the loss of his first wife (December 1964) and later a daughter (May 1979) in separate automobile accidents. To the benefit of his family, his school and his community, the enormous tragedies did not take his rich, caring spirit. He continued living a life full of integrity, love and compassion and added a special zest for life to anyone he came into contact with right up through his recent and sudden passing.

In 2015, Weimerskirch was a member of the first class inducted into the B-B-E school Hall of Fame for his lengthy list of contributions to the school and community. He was a dearly beloved teacher, coach or friend (or all of those things together!) to anyone who knew him. He will be held in our hearts forever.

Dennis Weimerskirch was born in 1940 to the late Henry and Theresa Weimerskirch on the family farm just north of Belgrade. Beyond a four-year period when he attended St. John's University for undergraduate work, Weimerskirch was a life long resident of the Belgrade community and passed away at the age of 78.

(Low-def video) Footage from the Belgrade-Brooten-Elrosa Hall of Fame banquet with the organization's inaugural class on October 10, 2015 at the Padua Pub.

Weimerskirch is survived by his wife of 49 years, Nancy, and numerous children, grandchildren and extended family. The entire community held him in their hearts as if he was family. He was heavily involved in the community his entire life and has recently been an active and contributing member of the Belgrade Lions Club.

Additional information will be published in the September 5 issue of the Bonanza Valley Voice newspaper.