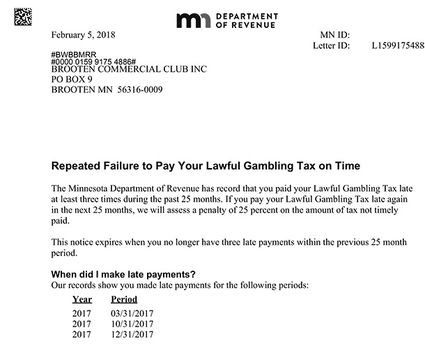 This is an image from a copy of a Department of Revenue letter sent to the Brooten Commercial Club in February 2018. Even though state statutes required the letter to be produced to members at club meetings, that never happened according to 2018 meeting minutes.

According to recently-found Minnesota Department of Revenue correspondence such as what is shown, multiple payment and audit deadlines were missed by former Brooten Commercial Club gambling manager Michelle Halls in 2016, 2017 and 2018. Records show that between March 2017 and July 2018, tax payments were late for five periods. State gambling statutes require that club members are made aware of this correspondence at club meetings. However, meeting minutes during that period of time show that this did not take place. This is also confirmed by meeting attendees.