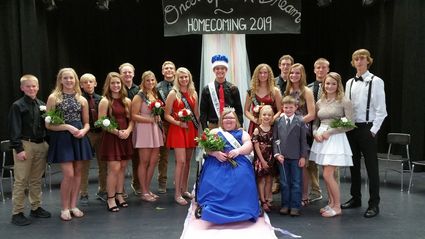 The full group of students participating as underclassmen attendants and senior candidates for B-B-E's Homecoming coronation on Sept. 23, 2019.

(HD VIDEO) Games, a solo and more included in this video clip from September 23 at the B-B-E high school.

The Homecoming week daily themes were announced along with varsity sporting events for the week. Senior Kiara Quade performed a solo, singing "You Are the Reason" by Calum Scott, and all participating students competed in a number of quiz-style games.

Senior Jackson Peter and Fiona Skinner were crowned B-B-E's 31st Homecoming King and Queen. Video from the program is embedded below featuring Quade's solo and some of the games.

Additional coverage and photos from the evening will be published in the September 26 issue of the Bonanza Valley Voice newspaper.