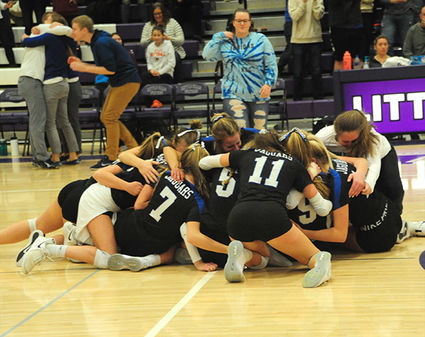 The post-match dog pile after the Jaguars won the section title on November 2 in Little Falls.

The Belgrade-Brooten-Elrosa Jaguars volleyball team had their backs to the wall in severe fashion in the Section 5A finals on November 2 at Little Falls high school.

After securing a 2-0 lead in sets, the Jaguars were put back on their heels with two straight set losses. In the deciding fifth set, the Jaguars led 7-4 before giving up eight unanswered points. Giving up an 8-0 run in a game five would be a death blow to most volleyball teams - but not this year's Jaguars!

(HD VIDEO) The Jaguars earn the first point of game five in the Section 5A finals against Walker-Hackensack-Akeley on November 2.

Trailing 12-7, the Jaguars responded with an incredible, logic-defying 9-2 run to close out the match and earn a consecutive trip to the Class 1A state tournament.

The Jaguars are 23-7-1 overall and open state on Thursday, November 7 at Xcel Energy Center in St. Paul. Their opponent and match time for the quarterfinals that day will be announced on Sunday afternoon, November 3.

Walker-Hackensack-Akeley finishes a stellar season with a 24-7 overall record and the Sub-Section 5A-North title to their credit.

Update: a long, long list of information on state and the week of state has been posted on Sunday, November 3.