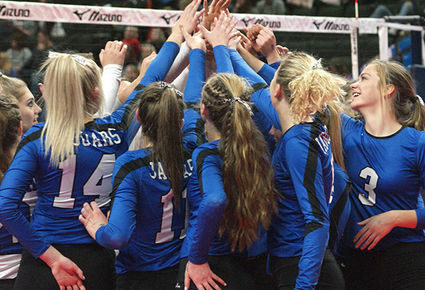 The Jaguars huddle up for one final time after their five-set win over Henning at state on November 8.

For the second year in a row, the Belgrade-Brooten-Elrosa volleyball team will play in Saturday's championship rounds of action at the Class 1A state tournament. This year the Jaguars will go for fifth place after advancing in the consolation bracket with a 3-2 win over Henning on November 8 in St. Paul.

Henning finishes their best-ever volleyball season with a record of 24-9 record. Meanwhile, B-B-E takes a 24-9 record into the consolation championship match on Saturday, November 9 when they'll face Greenway.

Video embedded in this web article features the final 3-0 rally that won game one for the Jaguars.

(HD VIDEO) The Jaguars rallied from a 24-23 deficit to close out a win in the opening set of their consolation semifinal match on November 8 in St. Paul.