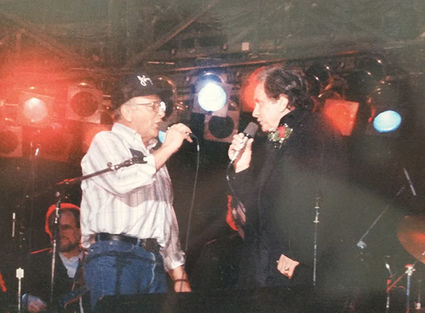 Herman Kampsen and Johnny Cash at Cornstalk Fest, singing with all they've got for a crowd of over 5,000 in Regal on August 18, 1989.

Over 50 years after his Minnesota amateur baseball career began, Herman Kampsen was one of over 5,000 central Minnesota residents who experienced the night of their lives when country music sensation Johnny Cash - known across America as "The Man in Black" - visited the northern reaches of Kandiyohi County in the humble town of Regal on Friday, August 18, 1989.

To read the full story, get a copy of the January 9 issue of the Bonanza Valley Voice newspaper.

A family video featuring the children of Herman and Delores Kampsen. Footage starting at 2:25 in the video is from Cornstalk Fest 1989 in Regal, MN.