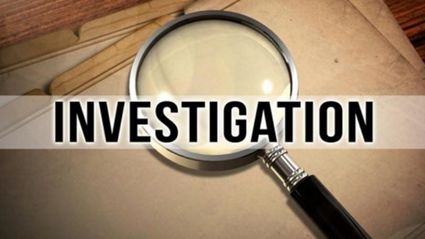 A review of tax forms submitted to the Minnesota Department of Revenue by former Brooten Commercial Club gambling manager Michelle Halls show that at least in one month, fraudulent figures were reported from the charitable gambling operation the club oversaw in Brooten and Sedan.

This week (February 3-7), the Department of Revenue released LG100A forms for Marcia's Bar in Brooten dated July 2016 to December 2018. The LG100A is a "lawful gambling receipts and expenses by site" form. This reports to the state the volume of gambling and which type of gambling took place at each site operated under a charitable gambling license.

For License No. 3575, the Brooten Commercial Club, the state has a form that represents the month of October 2016. The form says that paper pull tab gambling took place at Marcia's with gross receipts of $6,013 and prizes paid out of $4,750. Net receipts are stated at $1,263. From the net receipts amount, taxes were paid to the state of Minnesota (and presumably, the U.S. Treasury). 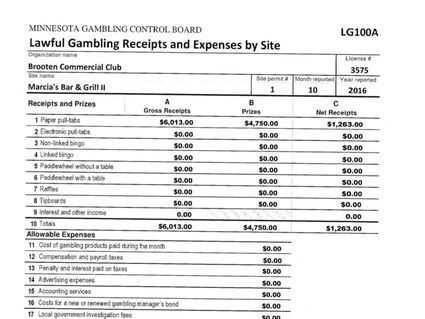 Shown is a portion of the document in question from the Minnesota Department of Revenue. It is from the period of October 2016.

BCC monthly meeting records show that in January 2018, membership learned that pull tabs were restored at Marcia's Bar. Also, the state of Minnesota used 2018 gambling records from Marcia's Bar to open up a full-scale audit and investigation of the BCC. This investigation has culminated with a felony charge of theft by swindle to be charged to Jana Zenner, former BCC CEO (2015 to 2018), in Stearns County District VII court.

The review and investigation into the BCC tax forms with the Department of Revenue continues.