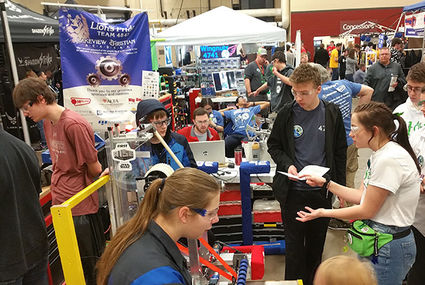 In back, from left: Aspen Peterson, Taylor Nelson and Dominic Finken near the robot on March 7 in Duluth. In front is Amber Stephani visiting with a guest in the booth. Finken is discussing alliance strategy with a fellow team captain.

The Belgrade-Brooten-Elrosa Resistance Robotics team wrapped up another successful season with a great showing at the Lake Superior Regional competition in Duluth. As they did in 2018 and 2019, Resistance Robotics finished in the upper half of teams at regions. This year they officially placed 30th out of 63 teams after nine qualifying matches were completed. In those nine matches, they finished with a 5-4 record.

Ultimately, two of their four alliance losses went down to the wire, literally, or rather - down to the "bar" as it was. In the ninth match, B-B-E's team attempted to hook its grappling arm on a bar suspended in mid-air. The goal was to complete a successful "hang" with the other two alliance teams' robots. Three tries at grabbing the bar were unsuccessful, but just barely. Had the hang worked out, the ninth match would have been a close win instead of a close loss, according to head coach Reed Adrian.

"I am so proud of this team," he said following that final match. "We have to be one of the youngest, if not the youngest, team out of the 63 here. We learned so much. We're very excited for next season."

The team included no juniors or seniors and just one sophomore. It had four freshmen, and 11 of the other 16 team members are in seventh or eighth grade.

Additional robotics team coverage was published in the March 12 issue of the Bonanza Valley Voice newspaper.