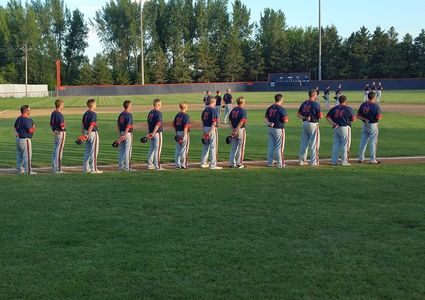 The Elrosa Saints players stand at attention during the playing of the National Anthem on July 24 before the final Stearns County League game of the summer.

The Elrosa Saints amateur baseball team begins the Region 15C tournament with an afternoon game in Greenwald on Saturday, August 8. The Saints take a 10-2 record into the postseason, after they won the Stearns County League title in this summer's regular season that concluded on July 25.

Elrosa and Lake Henry battle at 4 p.m. on August 8. The Lakers won a play-in game against St. Augusta earlier in the week by a 3-1 score to keep their season alive.

If Elrosa wins, they play again the next day, Sunday, at 11 a.m. in a winner's bracket game at Greenwald. If they lose, they play at 1:30 p.m. in an elimination game on Sunday.