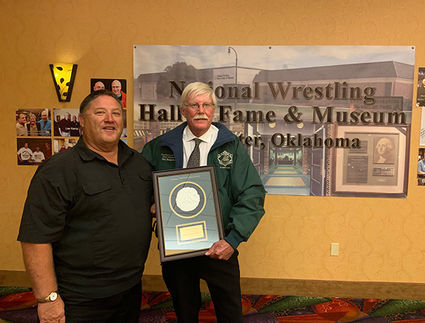 Former Brooten head wrestling coach Jerry Huls (left) is pictured with Bud Heidgerken at the Hall of Fame banquet in Austin on September 13. Heidgerken was assistant coach of the Buccaneers starting when it was founded in 1970. Coach Huls led the program from 1979 to 1983.

Bud Heidgerken was inducted into the National Wrestling Hall of Fame on Sunday at a ceremony held in Austin on Sunday, September 13. Heidgerken earned the Outstanding American title for his tremendous efforts at promoting the sport of wrestling along with equally tremendous civic engagement and tireless promotion of local causes. He was an assistant varsity coach with the Brooten Buccaneers wrestling program from 1970 through 1989.

A two-part story appears in the September 17 and September 24 issues of the Bonanza Valley Voice newspaper.