Veterans Day is next week Wednesday 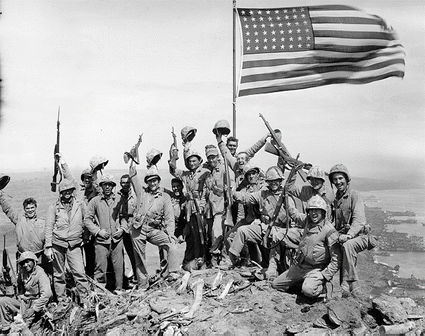 A photo of soldiers at Iwo Jima.

Wednesday, November 11 next week is Veterans Day, a public holiday that will be held on the anniversary of the end of World War I (November 11) to honor U.S. veterans and victims of all wars.

The November 5 issue of the Bonanza Valley Voice newspaper published a story about Edward Rodgers, a World War II veteran who fought in multiple combats in the Pacific Theater operations in 1945. Rodgers also served as a Military Policeman in Japan after the peace was declared on September 2, 1945. On that day, U.S. General Douglas MacArthur accepted Japan's formal surrender aboard the U.S. battleship Missouri, anchored in Tokyo Bay along with a flotilla of more than 250 Allied warships.

In September 1946, Rodgers returned home to his family's rural Padua farm. One of the eight children of him and his late wife, Adeline, is Gary Rodgers, the agriculture teacher at Belgrade-Brooten-Elrosa high school.