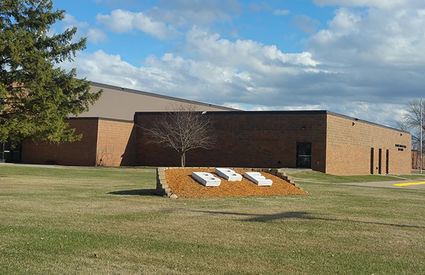 Belgrade-Brooten-Elrosa has two campuses: an elementary school in Brooten and a high school in Belgrade (shown).

Belgrade-Brooten-Elrosa has received in the neighborhood of one million dollars of private donations to go towards building and program-related improvements at each campus.

Superintendent Patrick Walsh made the announcement at Monday night's (December 21) school board meeting.

"These donations are intended to expand excellence in our school district. Without the donations, we feel we have an excellent project. With them, we can do this at a level that the project budget would not allow. With these donations, our $20 million project is now a $21 million project," he said. In addition, B-B-E has announced the formation of a new J Fund program to help provide personalized learning experiences for its learners. The J Fund will help guide private donations and provide appropriate recognition in a formal, organized manner.

While the details and the forthcoming recognition of recent donations are still being worked out, the school board accepted three large donations on Monday, one of which is still labeled anonymous.

One donation was in the amount of $550,000 from a source that is yet to be revealed.

"In a sense, the donations go beyond a remodeling of these areas, but maybe a better word would be renewing."

"It was clear in the early stages of iteration that our citizens wanted a return of the Fine Arts focus in our school district. The large donation towards this area will be remarkable. We will take a familiar area of our school and put a spin on it that goes above and beyond any expectation we had for the auditorium."

"As part of our district mission, we aim to root ourselves in our people, their traditions and history. As part of these donations, this generational culture will be captured in graphics that highlight our past, our present and our future."

The third donation, in the amount of $100,000, was from the family of the late George Borgerding, who passed away January 13, 2019 after a long, storied civic and business career in the community of Belgrade. It is earmarked to fund a new entrepreneurial center at B-B-E high school.

Walsh said, "The goal of the J Fund was to seek above-and-beyond contributions to our project that would highlight excellence, opportunity and recognition of the many contributions that have created the B-B-E region."

"The J Fund has many different levels in which benefactors could be involved. All of these contributions will be to expand our project to areas that we may not have even considered yet. There are other possibilities, for sure. We are considering other areas of renewal such as the outdoor ecological areas that are next to each of our buildings."

Anyone interested in giving to the B-B-E J Fund is asked to contact Shayla Wiechman in the district office. She will point potential donors in the right direction. All contributions to this fund over $5,000 will be recognized in the newly-renovated buildings as district leadership works on how and where they can be applied.

"When we are done with this project, these contributions will allow us to put an exclamation point on remodeling the buildings in one of the most refreshing school districts in Minnesota. We are crazy enough to see our district as a leader in education despite our lack of size or student body. We have curious students, a quality staff and a community that embraces us at a level that no district can surpass," Walsh said.

The J Fund has five levels of recognition:

(Above) A video clip from Act II of 'Junie B. Jones: the Musical' performed on November 20, 2016 at the B-B-E high school theater. This theater is one of numerous components of the schools' two campuses that are receiving major overhauls and renovations during the 2020-2021 building project.

Bronze: $5,000 and above donations will receive the name on plaques in each building.

Silver: $25,000 and above donations will receive the name posted on a classroom.

Gold: $50,000 and above will receive the name posted on a classroom or program of choice.

Platinum: $250,000 and above will receive the naming of a program or building wing.

Diamond: $500,000 and above will receive naming of a field, gymnasium or auditorium.

Superintendent Walsh stressed that any level of giving, large or small, is encouraged. One-hundred percent of donated funds will go towards student programs.

"Isn't this awesome to have these types of investments into our students at B-B-E?" Walsh added.

"We will work to the 'Nth' degree to ensure that we shape each part of the project with the care and attention these spaces deserve. Our goal is to touch each area of our footprint. In a sense, we want the look of an entirely new building for half the price."