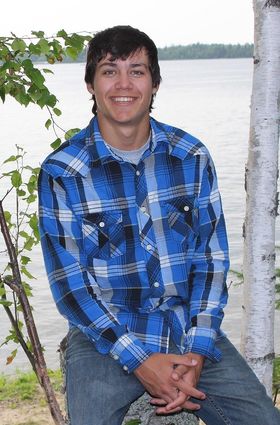 Josey Tensen's senior photo as was published in the May 28, 2015 graduation section of the Bonanza Valley Voice newspaper.

*Donations update on Monday, February 1: the public is asked to please consider a donation of any amount to the Tensen family for the costs they are facing to bring Josey home and the funeral costs. You can drop off a donation in person at the Belgrade Hardware Store, which is open 8 a.m. to 5:30 p.m. on weekdays (and Saturday 8 to 2 p.m.). Thank you.

*Funeral services update on Wednesday, February 3: a double funeral will be held at 3 p.m. on Sunday, February 7 at the Assembly of God Church in Willmar. Visitation will be the prior night from 4 to 8 p.m. at the Johnson Harvey Anderson Funeral home in Willmar. Please keep Minnesota's COVID-19 restrictions in mind this coming weekend. The Voice will live stream the funeral. To read more on that, click here: http://bbejaguars.blogspot.com/2021/02/double-funeral.html.

Jaguar Country and the greater community of Belgrade-Brooten-Elrosa is devastated.

Josey Tensen, a member of the B-B-E Class of 2015, was killed in a two-vehicle car-truck accident in the early morning hours of Friday, January 29, in rural, northwest Nebraska. Also killed was his girlfriend, Remington Harder of Hutchinson, a member of the Hutchinson Class of 2016. Both were vital and active members of their high school's respective FFA chapters, among many other activities, and both were student-athletes with their high school's respective athletic programs.

Tensen was a three-sport athlete for B-B-E, competing with pride and determination in football, wrestling and track and field.

As a senior defensive specialist, Harder was part of a Hutchinson Tigers volleyball team that went 27-4 overall and 11-0 in the Wright County Conference's East Division. The Tigers were defeated in the Section 2AAA semifinals by Prior Lake, who eventually went all the way to the state finals before losing 3-2 to Eagan. She was one of nine seniors on that Hutchinson team.

Tensen was the son of Tim and Suzy Tensen of rural Sedan. He was a craftsman, a tradesman and a proud, super hardworking blue collar guy. He had an unforgettable personality and an unforgettable desire to improve the spirits of anyone who got to know him.

Tensen's family set down roots in this area in 1943, when his great-grandparents Peter and Anna Tensen settled in Colfax Township, rural Belgrade. His grandma and grandpa Gerard and Doris Tensen formerly owned the Tensen's Corner Grocery Store in Brooten. Today it is the large brick building located north of the bank in Brooten at the corner of main street and Highway 55. Doris, now widowed, lives in Brooten. Gerard passed away on July 11, 2005. Doris's mother, Jessie Noordmans, lived to the age of 104 before passing away on April 30, 2005 in Morris.

Tim Tensen is a Brooten high school graduate in the Class of 1982. He was a dedicated member of the Brooten Buccaneers wrestling program. Suzy (Johnson) grew up on a farm south of Murdock, and she graduated from Kerkhoven-Murdock-Sunburg high school in 1986.

Click over to the Jaguars Sports extended coverage blog to read more about Josey Tensen and a little bit about his place over the years in the B-B-E wrestling program (link at the end of this story). Tensen was an extremely kind, caring and hard-working three-sport athlete for the B-B-E Jaguars. 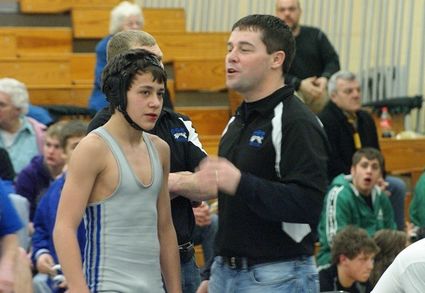 Josey Tensen and head coach Rich Vos shown matside together at the 2011 Section 5A individual wrestling tournament at Minnewaska Area high school. Tensen was just an eighth grader. Both of these young men are now with the angels. Coach Vos died on October 16, 2012.

B-B-E head wrestling coach Jack Mueller, whose first season as coach was during Tensen's senior year, said this on January 18, 2015 about him following Tensen's achievement of earning 100 career wins at the Paynesville tournament the prior week, "Josey wants everyone to feel like they are a part of something bigger than themselves. That is something that is hard to teach or coach."

Josey Tensen will be dearly missed, and he will never be forgotten by those who knew him and loved him. (Link) https://bit.ly/3t9GbsP.

Update on Saturday afternoon: funeral arrangements for Remington Harder are pending with the Dobratz-Hantge Funeral Chapel (Highway 15 South) in Hutchinson. Note: the initial version of this story reflected that Josey and Remington were engaged, however, that was not the case - although it appeared in all likelihood that was the path they were on.

Click on the following short link and you'll see some videos taken in the fall of Josey's senior year of high school at B-B-E. He was a terrific leader of student sections at home and away games: https://bit.ly/2MgOWRv.