Origins of ex-gambling manager's reign of terror in Brooten 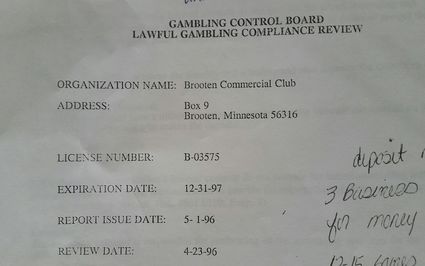 Part of the cover page is shown here from the May 1, 1996 lawful gambling compliance review report issued by the Minnesota Gambling Control Board to the Brooten Commercial Club.

A newly-uncovered Minnesota Gambling Control Board (GCB) document from 1996 shows just how far back the reign of terror by ex-gambling manager Michelle Halls goes. No fewer than three local bars were negatively impacted by the mismanagement of the Brooten Commercial Club's lawful charitable gambling operation across multiple years under her watch: the KaDe Shack and Marcia's Bar and Grill in Brooten and Rooney's Bar in Sedan. All three bar owners lost thousands of dollars under her oversight, but all three felt too intimidated to fight back against the influence she held over Brooten's business and civic community prior to her resignation on December 31, 2018.

A report issued on May 1, 1996 by the GCB reads in similar and stunning fashion to the March 6, 2019 report they released while terminating the Brooten Commercial Club's gambling license. The 1996 report had no fewer than 10 findings on the shortcomings of the oversight and management of Halls over the group's charitable gambling. The 2019 report had Déjà vu written all over it, stacking it up against what was published in the GCB report from 23 years earlier.

1. Findings No. 1, 2, 3: the organization's internal controls do not provide for sound accounting and administrative controls and are insufficient to provide for segregation of duties to protect the integrity of lawful gambling. (Minn. Rule 7861.0120, Subp. 1) Three examples provided by the GCB: (first example) "The gambling manager prepares the monthly B-2 schedule and also deposits the cash from each closed pull tab deal; (second example) the gambling manager is responsible for performing all the accounting activities for the lawful gambling; (third example) the gambling manager is solely responsible for maintaining the perpetual inventory records and conducting the physical inventory."

For these first three findings, the GCB issued required corrective action that included naming a separate person besides Halls to hold responsibility for the accounting aspects of the gambling, the depositing of cash from closed deals and overseeing the lawful gambling inventory.

For these last two findings, the GCB issued required corrective action including that the BCC would physically count all gambling equipment at each month's end and retain it as physical inventory, and that equipment reported on Schedule B-2 paperwork be included on inventory listings, and variances must be investigated.

3. Findings No. 6 and 7: the organization is not reconciling the profit carry-over with its gambling bank statement balance correctly. (Minn. Statute 349.19, Subd. 5) Two examples provided by the GCB: (first example) "The BCC has an ongoing and serious Schedule F variance problem, and the variance is a different amount each month. For the 15 months ending in March 1996, the variance ranged from a positive $3,621.26 to a positive $13,001.11. The BCC must establish a consistent variance from month to month. (second example) Also, the BCC has not been able to determine the items that are causing the variance to fluctuate each month. In the other example, the GCB stated that Halls typically made a reconciling entry on line 18 of the Schedule F for unpaid gambling taxes. The entry for October 31, 1995 was $2,124.44. We question the validity of this entry."

For these last two findings, the GCB issued required corrective action that Halls would provide a written explanation of the Schedule F figures which were not properly documented at the time of the review.

4. Findings No. 8 and 9: according to the review of closed games (pull tab, tip board or paddlewheel), all required items were not correctly audited and reported. Two examples provided by the GCB: first example, "Halls erroneously reported the total value of prized paid for two of the three games that we audited. For the deal 1st and Gold, the BCC overpaid on the prize by $35; for the deal Bite the Bullet, the BCC overpaid the prize by $106."

Second example, "There were serious omissions in the completeness and accuracy of the prize receipts. We reviewed 51 prize receipts for the three games audited. Multiple discrepancies were discovered such as no date entered, no name of game entered, no game serial number entered, no seller signature entered, inadequate identification, imprint not legible."

For this final finding, the GCB directed the BCC to have a valid lease agreement with a gambling site and have it on file with the Gambling Control Board.

Later at some point in 1996, Marcia Hallermann, the owner of Marcia's Bar and Grill, told Halls that she would be looking for a new organization to work with to conduct lawful charitable gambling. Contacting the Elrosa Baseball Club was an option she was considering, because Hallermann was "unhappy and disappointed" in the oversight and management of the gambling operation by Halls. It was at that point that Halls directed the city of Brooten to implement a city ordinance that required any charitable gambling to be conducted only by organizations that operated in the city limits of Brooten. The Brooten Commercial Club was the only organization based in the city limits (P.O. Box 9), which meant that either Hallermann have charitable gambling with the BCC and Halls, or her bar would go without it.

Hallermann then decided, based on the popularity of pull tabs and other charitable gambling at the time, that she would keep working under Halls and the BCC.

Hallermann said, "At any point from then through 2016, if I ever expressed frustration with how Michelle (Halls) ran the gambling operation, she would reply every time that because of the city ordinance, I had only two choices: work with her, or go without charitable gambling at my bar."

In June 2016, under false pretenses, Halls pulled the charitable gambling out of Marcia's Bar and Grill while misrepresenting the position of the Minnesota Gambling Control Board and disparaging Hallermann at BCC monthly meetings.

Hallermann said that she was not sad to see the gambling go, even though many of her patrons expressed great disappointment about the lack of charitable gambling at her bar after it was pulled.

Fast forward to 2017, and the environment appears to have changed in a dramatic way. At their monthly meetings, BCC members frequently discussed the need to get charitable gambling re-established at Marcia's Bar and Grill, because the BCC was suffering a chronic lack of funds. Finally, in January 2018, charitable gambling resumed at Marcia's Bar and Grill. Within two months of that, however, the Minnesota Department of Revenue began investigating the BCC. Charitable gambling at four locations overseen by Halls ceased on December 17, 2018. This led to the organization's demise in 2019. Its final funds were seized by the state of Minnesota on July 18, 2019.

In the wake of the oversight and management provided to the BCC by Halls prior to December 31, 2018, the state and federal government has assessed over $61,000 of taxes and penalties for delinquent taxes owed from activity under the charitable gambling license, which Halls was responsible for monitoring. On February 11, 2021, the Internal Revenue Service reported that the amount owed is $43,234.45.