Expansion and growth at Brut Worm Farms in Brooten 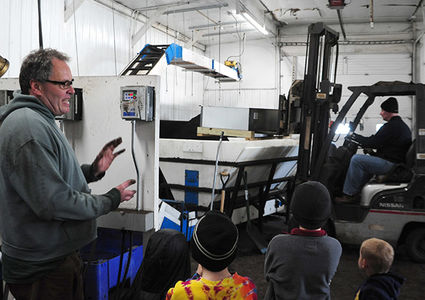 On April 13, 2019, Mike Larson is shown giving a tour of Brut Worm Farms' operation in the Brooten Industrial Park.

Written and submitted by Brut Worm Farms, Mike Larson, at the request of the publisher...thank you!

Brut Worm Farms was founded in March 2018 and is now entering its fourth year. The first year was spent preparing the facilities, getting the initial breeder worms, making mistakes, killing worms, and spending money. Brut sold some castings and soil locally and we received some positive feedback on the quality of the products.

Brut sold its first truckload of castings almost exactly one year after it started. It wasn't the price we were hoping for, but after a year of work, we were happy to get anything. Brut entered into an agreement to sell castings at a low price for the next ten months. In hindsight, that maybe wasn't such a good idea, but when you are starting out, you don't really know how things are going to go.

In the third year of Brut's existence, we were able to sell our product in 2,000 pound super sacks at a better price. A large company in California and another in Pennsylvania purchased the castings and used them in their soil blends and as a standalone retail product. This was better than year two.

During the second and third year, Brut made significant investments in developing its own retail brand. We hired a company in California to improve the Amazon listing and develop a web site capable of e-commerce. Money was spent on advertising on Amazon and Google. Brut also switched to a four-color preprinted bag for its retail castings.

Going into the fourth year, Brut is selling over 200 units per day and is one of the top sellers of worm castings on Amazon. The products are distributed through six warehouses around the country. Brut ships at least one semi load of 44,000 pounds per week. The new problem, which we hope continues, is that Brut is finding it difficult to keep up with demand.

More appeared in the May 13 issue of the Bonanza Valley Voice newspaper.