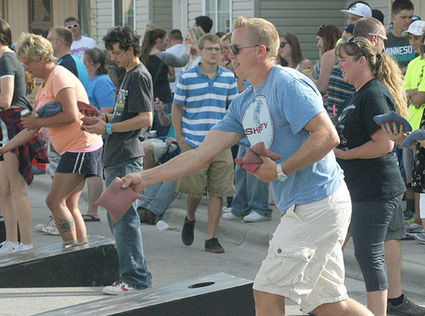 Ryan Sorenson shown competing in the BVD Bean Bag tournament on July 9, 2016. The tournament was sponsored by the B-B-E Area Jaycees.

The 2021 Bonanza Valley Days celebration in Brooten is almost here. Just one week away! Food, games, entertainment, music and more for all ages! Posters are up in a saturation effort at area retail locations across Brooten, Belgrade and Elrosa. Posters are also at the Elrosa and Belgrade Post Office buildings.

Friday morning update: the BVD 2021 Medallion was found! It was located at Memorial Park on the eastern side of town. Memorial Park is the site of the annual Memorial Day programs (weather permitting)

T-shirt sales are underway as of July 2. You can read more about that and see a video of the T-shirts by clicking here = https://bit.ly/2TzckwV. Cost is $15 for adult shirts and $10 for kids shirts.

The BVD Medallion Hunt is also finally underway! The Medallion Hunt brings a prize of $50 in local gift certificates (to be determined) to the lucky winner. Clues are posted each morning at Brooten City Hall. Children are reminded to be mindful of their safety as they hunt around town and be respectful of all property. Clues are posted at 8 a.m. each morning at city hall. **UPDATE: Clue No. 3 was posted at 9 a.m. on Thursday.

The BVD Sand Volleyball tournament has a registration cost of $60, and payouts are to-be-announced. To register, call the Bonanza Valley Voice newspaper office (320-346-2400). All proceeds beyond the payouts will be donated to the B-B-E Blaze Junior Olympics volleyball program.