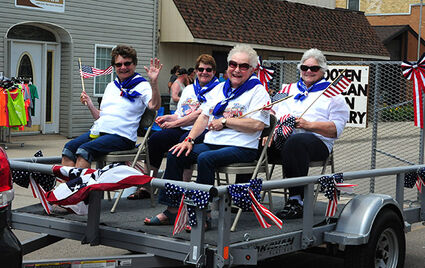 On July 14, 2019, Brooten American Legion Auxiliary members are shown on their float in the BVD grand parade.

POST-PARADE THANK YOU!...Thank you to everyone who came to town for the parade! Participants and parade watchers. It was a marvelous grand parade to help button up Bonanza Valley Days 2021!

The Bonanza Valley Days grand parade will be staged on the west side of town along School Avenue and Railway Avenue. They are near the elementary school (School Avenue) and along the train tracks on the northwest corridor of town (Railway Avenue). Below is the parade lineup that you are able to share ahead of the parade. If there are any late-comers, they will be worked in as best as possible. The Bonanza Valley Voice newspaper will answer phone calls as best as possible on Sunday morning if anyone has questions about the parade (320-346-2400). The parade will go down Central Avenue (Main Street) and then shift west on Roe Street to Western Avenue South, at which point it sweeps back north. The parade ends at the Hatton Street/Western intersection, at which point parade participants can get water bottles donated by Central Minnesota Credit Union. After that, everyone is invited to the Brooten Pavilion for an ice cream social courtesy of Bonanza Valley State Bank.