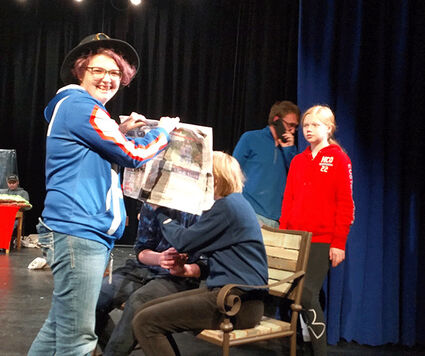 At musical practice on November 3, Savannah Finken holds a newspaper during a scene of Little Shop of Horrors at B-B-E high school's Olson Auditorium. Seen in back of the bench is Emma Roelike.

Join the Belgrade-Brooten-Elrosa theatre program on November 19th, 20th or 21st to watch their performance of Little Shop of Horrors at Olson Auditorium in Belgrade. Show times are as follows: Friday, November 19 at 7 p.m.; Saturday, November 20 at 7 p.m. and Sunday, November 21 at 5 p.m.

The story follows Seymour, a rundown flower shop employee, who allows his desires to seduce him into granting a plant's every wish. After finding Audrey ll, a strange and interesting plant, Seymour's life is turned upside down. The growing plant's demand for more ends in tragedy.

(VIDEO) A glimpse at musical practice at B-B-E high school on November 3.

The musical is based on a 1960 film by Roger Corman, book by Howard Ashman, music by Alan Menken and lyrics by Ashman.

Follow along the life of Seymour, his crush Audrey, and her boyfriend the dentist, as this strange and interesting plant takes on the city and the world!

Additional musical coverage has been published in recent issues of the Bonanza Valley Voice newspaper. More to come. A short video clip from musical practice on November 3 is posted below.

Tickets update: those who plan to attend one or two or all three nights of the musical are encouraged to purchase advance tickets. Tickets can currently be purchased during business hours at the following locations: the B-B-E high school office in Belgrade, Central Minnesota Credit Union in Belgrade, Kensington Bank in Belgrade and the Bonanza Valley State Bank in Brooten.