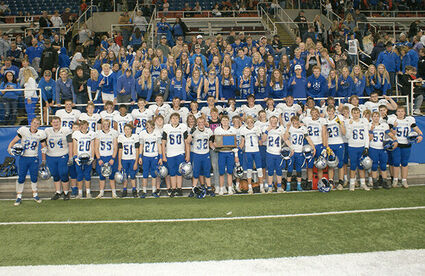 The B-B-E Jaguars football players gather at the FargoDome for a large group photo with their adoring fans.

The door has been busted down, and the Belgrade-Brooten-Elrosa Jaguars will no longer be an outsider to the Minnesota state football tournament.

The No. 2-seeded Jaguars avenged a Week Four loss in the regular season with a 52-44 win last Friday over top-seeded Upsala/Swanville Area to claim the Section 4A championship. They trailed 24-22 at halftime before blistering the scoreboard with 30 second-half points at the FargoDome.

B-B-E's first shot at a state tournament win is tomorrow (Friday, November 12) at Crown College in St. Bonifacious. Kickoff from Old National Bank Stadium is at 7 p.m. against Section 1A champion and No. 3-ranked Rushford-Peterson (11-0).

This was B-B-E's fifth appearance in a state-qualifying game, and they are now 1-4 in section championships.

(HD VIDEO) The Jaguars score their first touchdown of the Section 4A title game on November 5 in Fargo.

Head coach Chris Moscho spoke about the team's improvement across the past two-and-a-half months since opening day of practice, "Our senior leadership has been the key to this season and to getting us to state. The group of guys we had when we beat K-M-S in week one had an idea of what winning was like from other sports they competed in. Not one of them had any idea what winning was like with the 42 guys on the varsity football field. We had a group of kids who had success in wrestling, basketball and baseball. This group of kids had a 'TEAM FIRST' approach from the first practice. They didn't care who the plays were called for. They didn't care if they had ten tackles or one, one hundred yard rushing or fifteen yards. They truly cared about the team getting wins. They pushed each other all season long."

"After we beat K-M-S in the season opener, you could tell the team confidence went up a ton, and the seniors could already see their hard work pay off. They kept pushing each other harder and harder because they knew this team had the ingredients to be special."