Updates for DAY ONE of regions will be added here 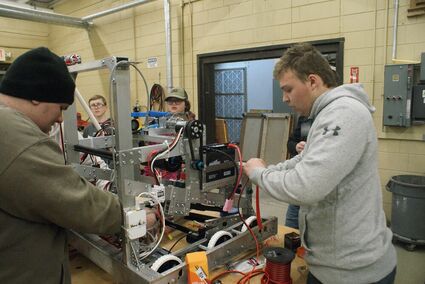 Nic Walstrom and Dominic Finken work on last-minute tweaks to the robot at the build session on February 24 in the high school shop.

The Belgrade-Brooten-Elrosa Resistance Robotics team begins their Lakes Superior Region competition on Friday, March 4 at the D.E.C.C. in Duluth. Their first heat is at 10:15 a.m. on the arena floor.

The remaining region competition schedule is as follows:

Updates will be posted to this web article on Friday.

Round one outcome: B-B-E's robot got out of the starting gate, but it stopped cold after its first movement and was unable to garner any points for its Red Alliance. Other teams in the Red Alliance were from Greenway and Grand Rapids high schools in Minnesota plus Franklin, Wisconsin. The Blue Alliance won this heat by a 79-19 score.

Round two outcome: B-B-E's robot had a great recovery from round one and helped lead its Blue Alliance to a 42-16 win! Other teams in B-B-E's Blue Alliance were from Hatton and Northwood, North Dakota plus Dawson-Boyd high schools. Their robot earned cargo and taxi points and also completed a final hang in the hangar. As a team, B-B-E Resistance has moved up to 35th place out of 58 teams in the regional.

Round three outcome: B-B-E's robot had another good showing, and they helped their Red Alliance earn a thrilling 39-33 win! Other teams in B-B-E's Red Alliance were from Cass Lake-Bena and La Crescent schools. The score was close from start to finish and was tied 16-16 late in the opening minute and then 18-18 with 57 seconds left. The Blue Alliance pulled in front 23-18 before ranking points (hanging on the bar) were tallied. Hangar points put Red Alliance on top, as they outscored Blue Alliance here by a 21-10 margin. Once the points were tallied, B-B-E Resistance climbed to 21st place out of 58 teams with a 2-1-0 record. This third match for B-B-E took place at 1:55 p.m. You can watch the match on the F.I.R.S.T. website by clicking here (short link): https://bit.ly/35qfjxV. The fourth match for B-B-E Resistance Robotics will start about one hour later today.

Round Four outcome: this was one of the more action-packed, high-scoring, exciting matches of the day so far. B-B-E's Blue Alliance, which included teams from Irondale high school and also Chippewa Falls, WI, came up short by a margin of 84-67. Irondale's team sat in second place out of 58 teams going into this heat with an undefeated 3-0-0 record. B-B-E started this heat in 19th place. B-B-E has very little time to regroup after this loss, as their fifth heat of the day begins at 3:36 p.m.

Round five outcome: B-B-E Resistance was paired with a rookie team from Chisolm plus a team from ROCORI high school. Both of their alliance partners entered with 3-1 records each. The Red Alliance pulled out a very close 42-39 win to send B-B-E's record to 2-3 overall while knocking them down to 30th place overall. In this heat, Red Alliance included teams from Franklin, WI plus St. Francis and Dassel-Cokato in Minnesota. When B-B-E's robot attempted to pull off a hang on the bar, the motor malfunctioned and did not stop winding the cable, which made the cable snap. Had the cable not snapped, the successful hang would have handed Blue Alliance the win in this heat.

The sixth heat of the day for B-B-E will start at approximately 4:35 p.m., so once again they have a very short time for turnaround. B-B-E will be paired with robotics teams from Two Harbors plus a Math and Science charter school in St. Paul. *Update: it appears that B-B-E's sixth heat will begin at 4:38 p.m. The match before their sixth heat is starting at 4:33 p.m.

Round six outcome: B-B-E's Blue Alliance lost 41-28 in another close match. Ultimately, they were outscored 15-1 in cargo points by Red Alliance, which resulted in the loss. Cargo points are scored by successfully shooting the balls in the middle or upper hoppers. B-B-E fell to 38th place and now has a 2-4 record. The winning Red Alliance was made of the rookie team from Chisolm, Cass Lake-Bena and a team from Iowa City, IA.

In their seventh and final heat of today, B-B-E will be in a Red Alliance that includes teams from Chisolm and Cannon Falls. That match is scheduled for 5:35 p.m. at the DECC.

Round seven outcome: B-B-E's Red Alliance lost 74-32, although their robot was able to pull off a successful hang to end the match. They were in 37th place going into this match, but now they have fallen to 44th place.