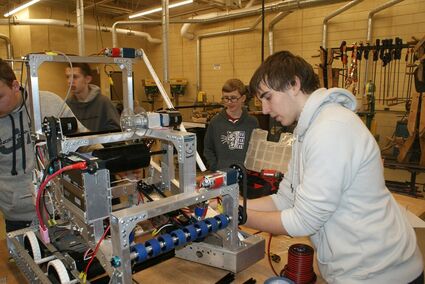 At the team's build session on February 24 at the high school shop, Davin Preble connects wiring on the robot frame.

Day two of competition at the Lakes Superior regional is underway at the D.E.C.C. in Duluth. The National Anthem was played at 8:40 a.m., and the qualification rounds got underway with the first one starting at 8:50 a.m.

B-B-E's first match of Saturday morning is the fourth match of the day and should begin at about 9:12 a.m. They are starting the day ranked 44th out of 58 teams with a 2-5 record. Today's qualification matches conclude after two matches are played by each of the 58 teams divided into groups of six. Those groups of six are divided in each match into blue and red alliances.

In B-B-E's first match of Saturday, their Red Alliance will include a team from Esko that is ranked No. 5 overall out of 58 teams plus a team from Pine River-Backus who is currently ranked No. 3 overall.

Updates will follow throughout the morning on this web article.

(HD VIDEO) Featured in this video is B-B-E's third match on Friday, which was the 27th overall qualification match of the region competition.

Round eight outcome: in their first match of Saturday and seventh match overall in the qualification round, B-B-E's Red Alliance lost 45-30. They were in great shape until the final 50 seconds, when their robot stalled out. Esko's robot stalled out after that with the score tied at 24-24. Meanwhile, two of the Red Alliance robots successfully climbed in the hangars to earn big ranking points to give the final edge on the scoreboard. Esko fell to 18th place, PR-B fell to 12th place, and B-B-E fell to 49th place with the loss. Right until B-B-E's robot stalled out, it was working properly and doing its job of collecting and moving cargo on the playing field.

B-B-E's final qualification match is No. 81 out of 87 overall at regions. It should start at about 10:27 a.m., and they will be paired in a red alliance with robotics teams from Park Center (Brooklyn Park) and Proctor high schools. Park Center is in 48th place with a 3-5 record, while Proctor is in 57th place with a 2-6 record. B-B-E will be looking to move up from their current spot of 51st place.

Round nine outcome: in their final match of the qualification round, B-B-E's Red Alliance lost 23-18. Their alliance was ahead 14-6 after the autonomous period ended. B-B-E's robot was able to collect cargo and make shots at the hoppers, but their shots all missed. One of the Blue Alliance team's robot made a late, successful traversal climb in the hangar for ranking points that put them over the top. B-B-E's robot made a successful climb in the hangar but was unable to score ranking points. B-B-E fell to 53rd place with a 2-7 overall record to conclude the qualification round. Update: the final placement for the team was 54th out of 58 teams.

The goal now for the team is to pack up quickly and get on the road back home so they can beat the bad winter weather that's heading towards Jaguar Country tonight. The snow is supposed to get started by 6 p.m.