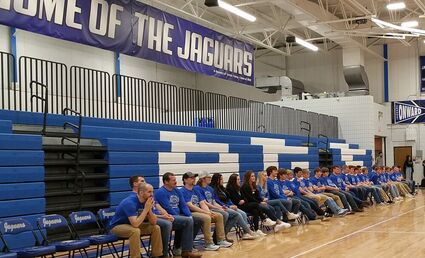 The team gathered in the high school gym during the pep fest and state send-off on March 2.

A rousing pep fest was held for the state tournament-bound Belgrade-Brooten-Elrosa Jaguars wrestling team on Wednesday, March 2 at the high school. Students in grades 6-12 were in attendance, and the high school pep band performed before and at the conclusion of the pep fest. Now-retired Belgrade and B-B-E head wrestling coach Chuck Marks gave a special speech to the team and fans.

(HD VIDEO) Shown is a clip from the pep fest held on Wednesday, March 2 at the B-B-E high school.

More coverage will follow in the March 10 issue of the Bonanza Valley Voice newspaper. A video is below featuring the individual state qualifiers.

Also, fans can follow the outcomes of the state individual tournament at the newspaper's Jaguars Sports extended coverage blog: https://bbejaguars.blogspot.com.

The state quarterfinal matches will start after 5 p.m. on Friday, and they will include all six B-B-E Jaguars who are competing in the individual tournament.