This web article has finally been updated (*late Friday night) 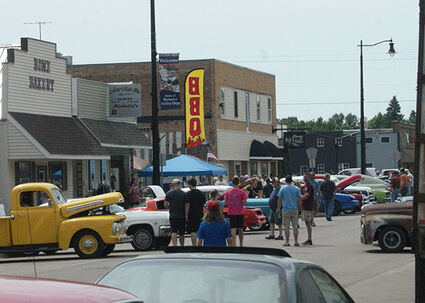 A view of Main Street in Brooten at Bonanza Valley Days on Saturday, July 13, 2019.

Coming here...a web article that outlines the food options for eating in Brooten over the Bonanza Valley Days weekend. There's something to take care of just about every meal you need between Friday and Sunday!

Great apologies from the desk of the newspaper owner! Updating this web article slipped through the cracks in my operation on Friday. Essentially 100 percent of my free/spare time has been consumed by a family project we adopted to paint 12 bean bag board sets that were built by the B-B-E high school woods shop. It's now late Friday night, and I can finally update this.

Saturday food options: you can take your pick of being served food beginning with at the KaDe Shack at 6 a.m., when Tom and Anne Kampsen's crew will serve a hearty buffet breakfast meal until 10:30 a.m. This is a great way to start your day! Once the Saturday breakfast buffet has concluded, the KaDe Shack won't serve food again until Monday morning.

The Chuckwagon opens at 11 a.m., and you can also get breakfast food at RJ's Mini Mart (which also gets rolling by 6 a.m.).

I don't have the specific time of when they will open, but a food truck that served food on Friday night at the street dance will operate on the north end of main street at the BVD vintage snowmobile show. The snowmobile show runs from 10 a.m. to 2 p.m., and registration runs from 8:30 to 10:30 a.m. This event is held along Railway Avenue just northwest of the KaDe Shack. Once the show has concluded, the food truck will move back to its spot it was at on Friday night that's right near the Brooten Lanes bowling alley. They are geared up and prepared to serve late into the night on Saturday. They've got food ranging from hamburgers and French fries to mini donuts.

(HD VIDEO) Here's a video recorded at the Scouts BSA waffle feed on July 11, 2021 at the city park. They did an absolutely phenomenal job serving everyone that morning! BRAVO!

At some point in the afternoon, perhaps as early as noon, the B-B-E wrestling club will open its food stand at the intersection of Second Street and main street. This is near ground zero of many of the kids' games that run from 9 a.m. to 3 p.m.

Marcia's Bar and Grill opens at 4 p.m., and they have a wide variety of terrific bar food. I was happy to finally get my supper close to midnight on Thursday night with some delicious buffalo wings at Marcia's. (Thank you, Marcia!)

Sunday food options: Day IV of BVD has a straightforward set of food options in Brooten: RJ's Mini Mart and the B-B-E Scouts BSA Troop 667 waffle feed (8 a.m. to noon) in the morning and then starting at 11 a.m. with the Chuckwagon and then after 4 p.m. at Marcia's Bar. That's it, and that all should serve you and your family quite well! It is important to come out for the waffle feed on Sunday...if the line is long, bring an extra measure of patience and a great attitude!