Saints play for the region title on Friday, August 12 in Elrosa 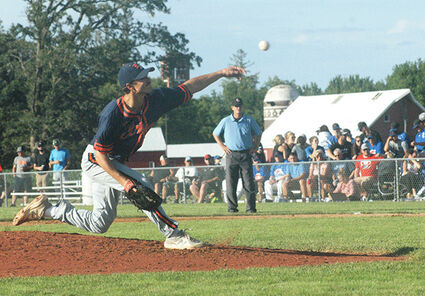 Payton VanBeck pitches against Spring Hill on Saturday in Meire Grove with a view illustrating why we love the Land of Rocks and Cows in rural Minnesota.

Note: a video clip from the Elrosa vs. Richmond game is embedded in this web article.

The Elrosa Saints amateur baseball team is heading to state for the first time since 2018 after they won both games in the opening weekend of the Region 15C tournament in the Land of Rocks and Cows of western Stearns County.

On Saturday against Spring Hill, the Saints posted a 4-0 lead through five innings in a 4-1 win. They followed that with thrilling 4-3 win against Richmond on Sunday.

Next for Elrosa is a meeting with St. Martin on the home field in Elrosa on Friday night, August 12 with first pitch at 7:30 p.m. Both the Saints and Martins field younger lineups, so both teams will not be playing under a great deal of pressure in what is the Region 15C championship game.

The winner advances to the Class C state tournament as 15C's top seed, while the loser will have to duke it out in the seeding bracket for 15C's No. 2 seed.

(HD VIDEO) The Elrosa Saints scored the go-ahead run in this video clip during their Region 15C game against Richmond on August 7 in Meire Grove.

In the two elimination games played on Sunday at Meire Grove, Watkins beat Spring Hill 11-3, and New Munich beat Lake Henry 12-11. In the final game, the Silverstreaks trailed 9-1 and then 11-5 going into the ninth inning. They plated six runs in their final at bat to end Lake Henry's run at regions.

Schedule updates for this weekend will be posted at the Jaguars Sports extended coverage blog: bbejaguars.blogspot.com. Video and other highlights from regions has been added there.

Paid attendance on Friday night in Elrosa was 176, while attendance for Saturday in Meire Grove was 660. Other region attendance figures will be published next week after the tournament has concluded.

The Class C amateur baseball state tournament will be held in Dundas near Faribault on August 19-21, 26-28 and September 2-5.