Strength and perseverance of our pioneer women (VIDEO) 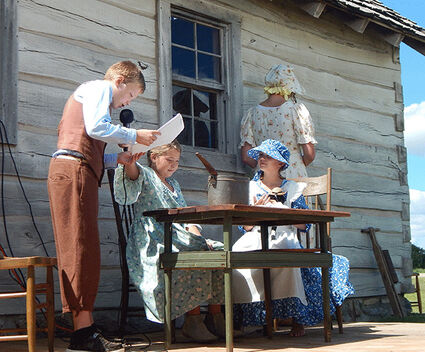 From left: Oliver Helgeson as Hans Henjum; Gwen Hande as Britta Henjum; and Vivian Helgeson as Gertrude, or Jane Johnson; all children of Johannes Hansen and Kari Eriksdatter of Norway; with Melanie (Henjum) Helgeson playing the part of Kari Eriksdatter, who came to America as a widow in 1861 from Norway.

On Sunday, August 21 at the Norway Lake Lutheran Historical Association old log church in rural New London/Sunburg, Marlin Henjum spoke about his new book, Wheat King, that has just been released. His speech followed a play performed on stage by the log church that focused on the pioneer-era story of Kari Eriksdatter, who moved from Norway to Wisconsin and then to Arctander Township in the 1860s with her three children.

In the video below, Norman Hande speaks about the play that was set to be performed that afternoon.