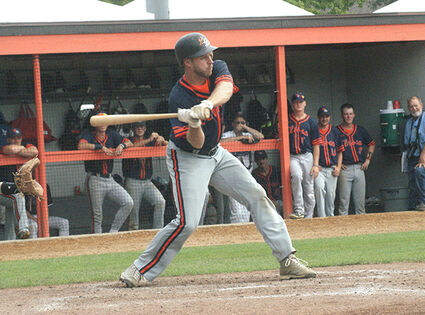 Kevin Kuefler, who batted at the top of the order this season for the Elrosa Saints, makes one of his swings at the state tournament on August 27 in Dundas during their game against New Ulm.

The Elrosa Saints amateur baseball team took on top-ranked New Ulm in the second round of the Class C state tournament on Saturday, August 27 in Dundas. A large crowd at Memorial Field saw a tight ball game play out through the first four innings. The Brewers pulled away from Elrosa in the final innings and advanced to the Sweet 16 with a 12-2 win in eight innings.

New Ulm improved to 31-3 with the win, while Elrosa finished a remarkable season of their own with a final record of 20-9.

A video from the bottom of the fourth inning is included with this web article.