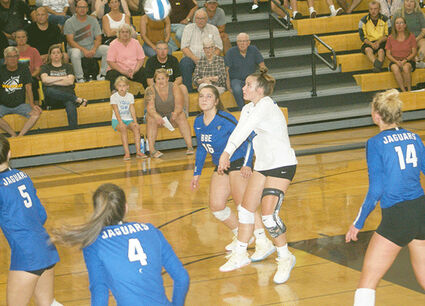 At NL-S on September 6, libero Harley Roering digs out a Wildcat attack in game two.

Trailing 13-11 in game five at No. 12-ranked (Class 2A) New London-Spicer on Tuesday, September 6, the Belgrade-Brooten-Elrosa Jaguars volleyball team had their backs to the wall but proceeded to score the last four points of the night and put a huge exclamation mark on a 3-2 win over a very talented Wildcats team. The Jaguars had built an 8-4 lead with a kill by Ava Mueller and a block from Allison Dingmann to force NL-S into a timeout. The Wildcats then outscored the Jaguars by a 9-3 margin to put a firm grip on the final set ahead 13-11.

Then the epic comeback!

Mueller had a kill, and Dingmann had a tip to tie it up at 13-13. NL-S called their final timeout, but it was too late to slow B-B-E's attack. Mueller fired off another kill to bring game and match point. Dingmann finished the night off with an ace block on an attack that just barely cleared the net. BOOM! Final score: B-B-E 15, NL-S 13. The Jaguars improved to 2-1 with the win! NL-S falls to 3-2 overall.

After B-B-E won two nail biters in games one and two by scores of 26-24 and 27-25, the Wildcats stormed back and punched the Jaguars in the mouth with a 25-15 win. The fourth set was much closer, but the Wildcats were just better down the stretch in a 25-21 win.

The 12th-ranked Wildcats and 10th-ranked Jaguars duked it out for two hours and 10 minutes at NL-S high school. Throughout the match, neither team showed clear signs of superiority in any facet of the game. What decided the outcome boiled down to execution and composure, and the Jaguars found it just when they needed it.

Last Thursday against the No. 8-ranked MACCRAY Wolverines in Brooten, the Jaguars sputtered in a 25-10 loss in game one before giving the visitors a run for their money in two set losses by two points each.

This week the Jaguars travel to Paynesville for the highly-anticipated Central Minnesota Conference opener on Thursday (7 p.m.).

The Southwest Minnesota Challenge Invitational at Marshall is Friday and Saturday with the first match set for 5 p.m. on Friday at Marshall Area high school.

The Jaguars have three days of practice next week before hosting Kimball Area on Thursday, Sept. 15 (7 p.m.)

The Crosby-Ironton tournament is on Saturday, September 17.

Video included in this web article features the final two points scored in the match.