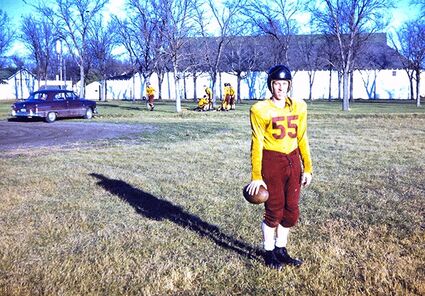 Dale Miller, Brooten 1954 graduate, is shown in his football uniform next to the Brooten football field on a sunny October day in 1953. That fall, the Buccaneers won 5 of their 6 games while claiming a conference title.

The September 24, 1953 issue of the Brooten Review newspaper previewed the 1953 Brooten high school football team as they prepared for the season opener at home against Eden Valley. Expectations ran high for a strong season that fall on the gridiron.

The front page of the October 20, 2022 issue of the Bonanza Valley Voice newspaper included a large color photo of the football team with the Brooten Pavilion in the background. In that era, the Buccaneers played their 8-man football games at a football field located on the present-day site of the Brooten city park softball field.

The newspaper is working on additional looking back coverage of the 1953 Brooten football season to be published in the October 27 issue.