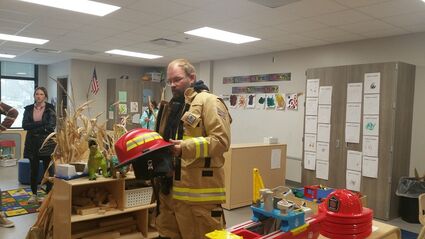 Brooten fire fighter Aaron Anderson explains the equipment used by a fire department for personal protection in a fire.

On October 13, fire fighters from the Elrosa, Belgrade and Brooten fire departments visited classroom and spoke with students at the B-B-E elementary school. Fire trucks from the Brooten Fire Department were also on display at the school's east parking lot for children to get an up close look at as part of Fire Safety and Fire Prevention Week.

A video with this web article features Brooten fire fighters Mark Torkelson and Aaron Anderson visiting with fourth and fifth graders at the Bohmer Innovation Zone (BIZ) in the school's west wing.

Chief Torkelson recalled how he and one other Brooten fireman helped out with the fire in Becker between 8 p.m. in the evening and 6 a.m. the next morning. Torkelson then reported to his regular day job.

The fire department also assists with the local ambulance crew as well as with storm spotting.

(HD VIDEO) At the Bohmer Innovation Zone in the elementary school's west wing.

"Most of us are Skywarn spotter trained," said Torkelson. "Also, most of us are EMR trained, which is an advanced title to take care of people. This can be giving CPR or putting in an airway so they can breath."

Torkelson was asked about the weight of a fire fighter's equipment, and he estimated that to be about 70 pounds.

A photo gallery from that morning can be found by clicking here: https://bit.ly/3D8Ow5U.

Large, color group photos of the Brooten, Belgrade and Elrosa fire departments were published in the October 6 and October 13 issues of the Bonanza Valley Voice. The Sedan Fire and Rescue crew has their group photo published each spring in May during National EMS and First Responder week.