...next is a rematch with Albany, then a trip to Pierz to complete regular season 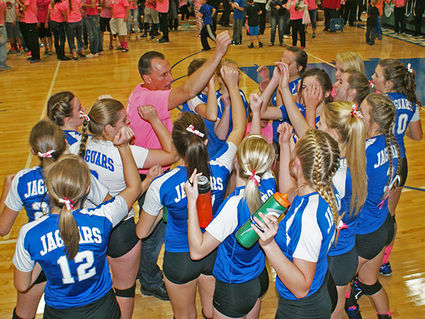 The Jaguars huddle up with Coach Weller one final time following their thrilling 3-2 win on Tuesday on Dig Pink night against Howard Lake-Waverly-Winsted.

For the first time since the 2012 season, the Belgrade-Brooten-Elrosa volleyball team is champions of the Central Minnesota Conference. While at this point they've clinched a share of the title, the Jaguars have eyes on winning it outright with a win next week at Pierz.

On Tuesday this week, the Jaguars (6-0 in the conference) clinched a share of the CMC with a gutsy comeback 15-12 win in game five against Howard Lake-Waverly-Winsted. It was their 17th win of the season and came on the heels of a 2-2 performance at the Alexandria tournament on Saturday.

Next for the Jaguars (17-9 overall) is a trip to Albany on Monday to face a powerhouse 18-6 Huskies squad that's in first place in the Granite Ridge Conference.

On Thursday, Oct. 22, the Jaguars wrap up the regular season with the CMC finale at Pierz.

Down 11-9 in game one last Thursday, the Jaguars toughened up at the net and blasted the Cubs with a 14-2 run. The game ended in B-B-E's favor on a kill by Kendall Kampsen with a score of 25-15.

The Cubs battled for small leads in game two at 9-6 and 14-11. After the Jaguars scored two straight points, the Cubs surged ahead 17-13 on two straight B-B-E errors.

Two straight kills by Morgan Gronli followed, but after Kimball took a 19-15 lead they fell victim to unforced errors that tied the game at 19-all.

Kern smashed two straight kills to put the Jaguars up 21-20, and Trustheim had two kills for a 23-21 lead. Kern put the exclamation point on a big comeback win with two ace serves making the final score 25-21.

In their opener on Saturday morning at Alexandria Area high school, the Jaguars had a tall order: defending tournament champion North St. Paul. A Class 3A finalist a year go with 28 wins, the Polars entered the day 14-5 this year with a second-place mark in the Metro East Conference.

The task felt even more difficult after the Polars beat the Jaguars 25-13 in game one. Unfazed, the Jaguars proceeded to win game two 25-23 and then game three 15-9.

In the second match, the Jaguars faced one of the top teams in Class 2A, Rocori, and easily beat the Spartans (22-1 overall) 25-16 in game one. Rocori turned the tables and beat the Jaguars 25-7 in game two, and game three went Rocori's way by a 15-9 score.

In the third-place match, the Jaguars were paired with the tournament hosts. The Cardinals (13-11 overall) brought a tough resume as they are in the thick of the Central Lakes Conference race, just two matches behind front-runner Rocori.

The Jaguars clinched the comeback with a 6-1 run while earning a 25-22 win to force game three.

In the deciding game, Alexandria got the upper hand early with a 4-1 lead. Two kills each from Gronli and Kern closed the gap to an 8-8 tie. After trailing 10-8, the Jaguars got two ace blocks by Trustheim and an ace serve from Kern to pull ahead 11-10.

A kill by Trustheim put the Jaguars up 13-12, but they hit long on the next play and then got blocked and gave up a kill in a 15-13 loss.

On a special night where the seniors on the team and parents of the players were honored, the Jaguars celebrated the Dig Pink breast cancer-fighting fundraising effort while the C-squad, JV and varsity teams all picked up wins.

In the varsity match, the Jaguars won games one and two with relative ease by scores of 25-14 and 25-19.

In game three, the Lakers got a small lead going at 8-3 and maintained it almost the entire way while winning 25-19. After falling behind 18-13, the Jaguars closed it to 22-19 before faltering down the stretch.

Game five started rough for the Jaguars, with four unforced errors putting them in an early 4-1 hole. After trailing 8-3, the Lakers had two errors to cut it to three points. Down 10-7, Trustheim drilled a kill from the back row, and Kern earned three straight kills to put the Jaguars up 11-10.

From there it was all offense up to game point. While the Lakers got two more kills, Gruber and Trustheim hit kills for a 13-11 lead. Trustheim then swatted the ball from the left side criss-cross over the net to open floor. In an anti-climactic ending, the Lakers hit out of bounds to hand a 15-12 win to the Jaguars.