Dates for annual summer celebration set for August 7, 9 and 10 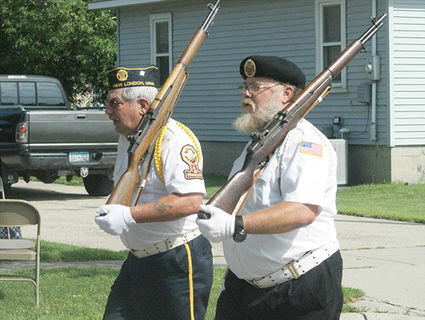 The Belgrade August Fest committee is gearing up for another fun-filled weekend set for Friday and Saturday, August 9 and 10. While the August 1 and August 8 issues of the Voice will have full schedule information for August Fest, we've put together a preview story hitting some of the highlights.

Prior to the two-day celebration in Belgrade, the Belgrade Economic Development Authority (EDA) invites everyone to their Concert in the Park night on Wednesday, August 7 with the live entertainment of Gig Noonan. The music begins at 6:30 p.m. at the Belgrade city park (South Highway 71), and the B-B-E Boy Scouts will be selling hot dogs and refreshments on site.

City-wide garage sales will take place on Friday and Saturday, so look for signs around town pointing the way.

The main event on Friday is the Belgrade Fire Department's chicken dinner at the Belgrade V.F.W. from 4:30 to 7:30 p.m. The friendly staff of Kensington Bank will be serving ice cream at the same time.

The Friday night entertainment at the Belgrade V.F.W. will be a street dance with the local band Last Exit performing on stage.

(HD VIDEO) Footage from the final units in the grand day parade at August Fest in Belgrade on August 12, 2017.

Saturday brings a full day of events including the Walk/Run to start the day. The B-B-E Post Prom will hold a 5K Run Run/Walk on Saturday, August 10 at 8:30 a.m. at the high school front parking lot. Registration is $20 per person (t-shirts included, snacks and water provided after the run, and cash prizes awarded!)...the full registration form is published in the July 25 issue of the Bonanza Valley Voice newspaper.

A full set of inflatables will again be set up on the north end of main street for children to enjoy. A kids pedal tractor pull will take place in the afternoon.

The grand day parade is at 4 p.m. on Saturday, and after that, the Belgrade Royal Ambassador and Junior Ambassador coronation program will be held in the semi trailer on main street.

The B-B-E Jaycees is once again organizing a bean bag tournament that takes place following the coronation.

Saturday night's feature entertainment is Mixed Brew in the free street dance outside Brother's Bar. Also, the Belgrade Lions will sponsor a fireworks show during the street dance.