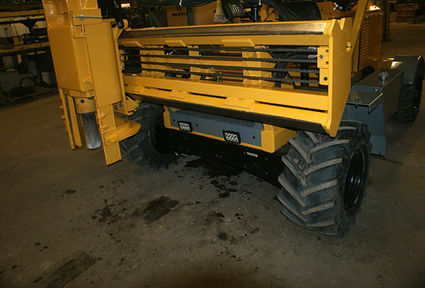 The Arrow Hammer 1450H machine at Packer Brothers and Precision Manufacturing in Brooten. This is the prototype model that was developed over many months in 2020.

Note: this article was published in the January 7, 2021 issue of the Bonanza Valley Voice newspaper.

If you've ever operated a machine of any size and said, "I wish they would've designed this differently (and better)" then you know how the process began for improvements of the design for the Arrow Hammer 1450H.

Staff at Packer Brothers manufacturing company in Brooten's Industrial Park has built a new-and-improved Arrow Hammer hydraulic breaker machine with a long list of improvements over its predecessor, the Arrow Hammer 1350T.

The Arrow Hammer utilizes a hydraulic hammer that's used for various commercial-level uses including concrete breaking, tamping, trenching and creating post holes. The hydraulic hammer is guided by an electronic stroke that meters out the frequency and positional operation of a cable-operated 1,200-pound hammer. This hammer weight has a variety of inter-changeable tools to drop on concrete and break it up.

In the example of breaking concrete - from sidewalks to highways - the Arrow Hammer can break up between up to six and 20-inch layers of concrete as well as frost.

Paul Linn of Packer Brothers, lead designer of the 1450H, explained the main design, "I'd classify it as a hydraulic drop hammer. It uses gravity as its busting force, and we hydraulically lift the weight and then drop it."

The lift is achieved by a hydraulic cylinder connected to block and tackle with a 3/8-inch cable in a 6-to-1 ratio.

Throughout 2020, the 1450H model was designed from the ground up, with the prototype machine operational by December.

Linn said about the guiding principle of the whole process, "I want the quality of the new machine to do the selling and have us in a position where we don't need a salesperson out promoting it."

The 1350T was first produced around the year 2000, according to Linn. In the 2000s and into the last decade, the 1350T was produced in a facility in Indiana. Five years ago, Packer Brothers purchased that facility and continued building the 1350T there.

Build time was generally between 35 and 40 days. With the 1450H, Packer Brothers has an ambitious goal of producing a new machine in as few as 14 days.

"That's our goal, at least," said Linn, as the company is continuously working on reducing the production time.

When Arrow Hammer was in its peak days, they produced 108 units in their best year. In Packer Brothers' Brooten facility, they hope to get to some big double digits.

The new 1450H utilizes hydrostatic transmissions similar to most consumer-level riding lawn mowers. This allows for a slower, gradual application of movement for the machine compared to the 1350T model, which has a traditional clutch and manual transmission.

From the beginning stage of building the 1450H model, one big difference stands out: the heavy-duty frame is considerably heavier and tougher than the 1350T's frame.

Another difference is in the engine, with the 1350T model using a John Deere 4.5-liter four cylinder 75-horsepower engine.

The 1350T used a manual transmission with a manual clutch and creep motor. Also, that model ran the double pump off of the front of the motor. The 1450H moves the double pump in tandem with the hydrostatic pump.

The 1350T used multiple valves to run the hammer drive, while the 1450H runs on just one sectional valve to power the hammer. To provide easier access, the 1450H's valve has been relocated from inside of the front of the machine to the side of the machine. It is protected by a heavy-gauge steel enclosure.

The instrument panel includes an LCD display with integrated selector and mode buttons along with an integrated switch panel.

The 1450H model increases user comfort with a new side console design, which moves the control panel to the right side of the operator. Electronic switches, most with easy-to-use rocker panels, replace the old manual valve switches.

The engine enclosure on the 1450H was totally redesigned. Instead of tilt-out hinged doors on the 1350T, the new model has engine panels that are easily removable. For security purposes, the engine panels also lock with a common key.

A few of the big-item 1450H features include: 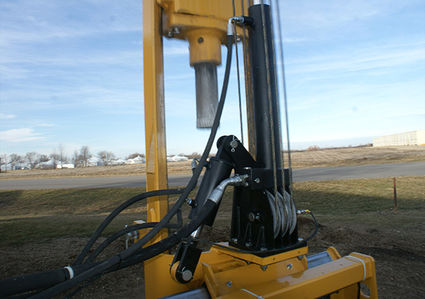 The main apparatus on the Arrow Hammer 1450H prototype machine is shown between strikes of the hammer pin on a cement slab at Packer Brothers in Brooten. The newspaper publisher got a hand-on experience with the machine on December 8 of last year and was thoroughly impressed!