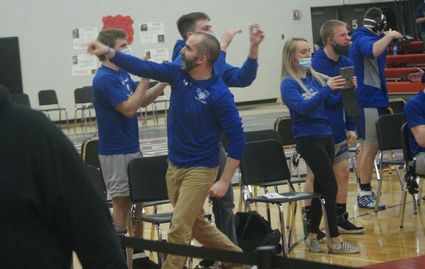 Coach Jack Mueller showed his excitement just as his Jaguars clinched their 28th win of the season in the Section 5A championship against defending state champion Long Prairie-Grey Eagle/Browerville on Saturday, March 13 in Barrett.

The Class 1A state tournament Final Four was oh-so-close to including three teams from the Central Minnesota Conference, but it was not meant to be. Unfortunately, the No. 2-ranked Belgrade-Brooten-Elrosa Jaguars wrestling team is not one of the two CMC teams who advanced to the state semifinals, but it was not for a lack of heart or desire to get there.

On Saturday in the Class 1A state quarterfinals, the Jaguars suffered just their fourth loss of their unforgettable, record-breaking season. They fell 33-30 to Bertha-Hewitt/Parkers Prairie/Verndale, winners of the Section 6A title.

The state semifinals will include Section 7A champion Royalton/Upsala, Section 3A champion Jackson County Central, Section 6A champion BH/PP/V and Section 4A champion Kimball Area.

(HD VIDEO) This video clip is taken during the Class 1A state quarterfinals, starting at 170 pounds, in the Belgrade-Brooten-Elrosa vs. Bertha-Hewitt/Parkers Prairie/Verndale match at West Central Area high school in Barrett on March 13.

To earn their first trip to the state tournament, the Jaguars gave a tremendous performance to knock out two-time defending state champion Long Prairie-Grey Eagle/Browerville 33-23 in the Section 5A championship.

Both matches on Saturday were hosted at the West Central Area high school in Barrett.

The BH/PP/V Raiders defeated No. 6-ranked West Central Area/Ashby/Brandon-Evansville 44-33 to advance to the state quarterfinals. WCA/A/B-E staged a late comeback after falling behind 26-0 through the 132-pound weight, but it fell short. The Raiders won Section 6A for the third straight season.

To read the full story, get a copy of the March 18 issue of the Bonanza Valley Voice newspaper.

Click on the following short link to view the Bonanza Valley Voice SmugMug photo gallery from the LPGE/B match: https://bit.ly/3cROSR7.