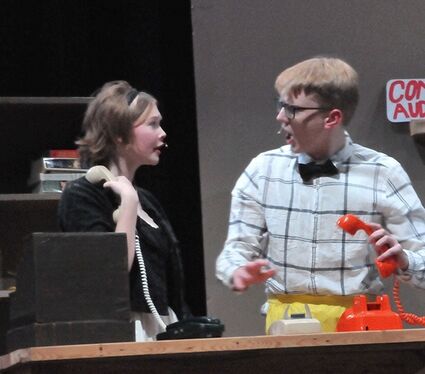 Audrey and Seymour during the opening scene of Act II on opening night for B-B-E's fall musical, Friday, November 19 at Olson Auditorium in Belgrade.

The Belgrade-Brooten-Elrosa fall musical 'Little Shop of Horrors' opened tonight, Friday, November 19, at Olson Auditorium, B-B-E high school. At the end of the business day, 105 tickets had been pre-sold for the opening night. When the dust settled, the crowd had grown to almost 200. Tickets were on sale for the past few weeks at Bonanza Valley State Bank in Brooten and at Kensington Bank and Central Minnesota Credit Union in Belgrade.

(HD VIDEO) Shown is a clip from Scene II of Act I at the opening night of the musical at Olson Auditorium on November 19.

The musical Little Shop of Horrors is based on a 1960 film by Roger Corman, book by Howard Ashman, music by Alan Menken and lyrics by Ashman.

B-B-E Theater's opening night production of Little Shop of Horrors was breathtaking with captivating, gripping scenes that showed a wide range of emotions. The cast was outstanding from top to bottom! Simply put, they knocked it out of the park. The show will pin your ears back. Scenes such as "Somewhere That's Green" in Act I (and its reprise in Act II) will bring tears to your eyes, while other scenes have moments that will make you gasp.

Two more shows are coming this weekend: Saturday, November 20 at 7 p.m. and Sunday, November 21 at 5 p.m. Tickets are $7 for adults and $5 for students. Come early and get a good seat if you haven't pre-purchased your tickets already.

Below is a short video clip from Act I, Scene 2.